Our Guest is Rob Scott 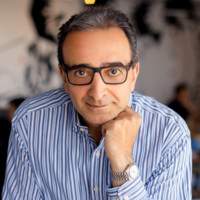 James Orsini is the President of The Sasha Group, an educational, consulting, and marketing services firm under its umbrella company, the VaynerX. James works alongside Gary Vaynerchuk, its CEO and serial entrepreneur. The Sasha Group runs as a consultancy on the front-end, and an agency in the backend.

James has held previous positions as Chief Operating Officer and Chief Integration Officer for VaynerMedia, a digital agency with social at its core. He has proven himself as a great leader and has authored several business articles including Agency of the Future, Let Leaders Lead, Guided Exploration, and Practitioners Practice.

Here are some power takeaways from today’s conversation:

How his entrepreneurial journey began

The difference between a delegator and a facilitator

The importance of positioning

The need for structure in building an empire

The origin behind his nickname, Jimmy The Pencil

How James uses social media in his favor, personally and business-wise

Putting together the Eisenhower Matrix to execute their ideas

What strategies worked and what didn’t work

Delegation is having somebody do what it is that you should do or can do. Facilitation is taking the time to understand what people do well, and then connecting them with other people who have that need.

The Importance of Positioning

Positioning is very important because the most value comes when everybody feels like they’re a winner at the table. It’s not when one walks away being the loser, and one walks away being the winner. We find value when everybody walks out of the room and feels like they’ve won. Therefore, positioning is very important in negotiations, in client-agency relationships, in boss and staff relationships, and in business in general.

Establishing VaynerX as a Holding Company

In order for you to be a $500-million integrated, independent, international communications company, you’re going to have to be more than a social media advertising company. You need a structure when you’re growing an empire. As a result, VaynerX became the holding company and Sasha Group is under this VaynerX umbrella. There needs to be a clear head at the top of it, with a vision to take it forward. The Bible says that without a vision, the people perish. So the same thing holds for a company.

Gary is the social media guy but you can’t be $500 million being the social media guy so he had to be more than that. So he worked hard on it. He acquired companies, spun off a tech company from his media department, and started a new company. On the day he announced The Sasha Group, they had 4,700 inquiries in 48 hours. He also acquired a company and birthed Vayner commerce. Now, he’s got Vayner Speakers and VaynerTalent.

THE133: When Parent Expectations and Cultural Norm Vastly Differ From Your Own Desires

Our Guest is Shomail and Farhan Malik What do you do when all your life,…

THE123: Finding Meaning and Power From The Darkness