Our Guest is Coss Marte 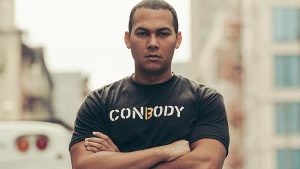 Coss Marte was sent to jail as the ringleader of a multi-million dollar marijuana operation. He was also grossly overweight and warned by his physician that his current lifestyle, if left unchecked, would likely kill him.

Faced with this grim prognosis, Coss started to get in shape using the tools he had — his prison cell and his own body weight. Within six months he lost 70 pounds and replicated his successful formula of body weight exercises with 20 other inmates.

Then he launched CONBODY, a prison style bootcamp that has gained over 50,000+ clients and hires formerly incarcerated individuals to teach fitness classes. Since the launch of his company he’s been featured in over 200 major media outlets such as NBC, CNN, The New York Times, 3 time TED talk speaker, and Men’s Fitness. He’s also won major pitch competitions such as Defy Ventures, Pitch for Good by TOM’s shoes, and the YPO shark tank competition.

THE32: Master Your Power Within and See Improvement Over All Aspects of Life

THE109: Discover The Password To Unlock The Best Version Of You

Our Guest is Sandra Biskind As a high-frequency transformational catalyst, my guest today has dedicated…